As anyone who knows me or who has met me in schools etc. will know, snakes have been my number one favourite animals since I was a little boy! We were treated to some amazing snake moments in Costa Rica, both during the daytime and on the many night walks which myself and Nick Baker, amongst others, undertook.

The first snake we saw during the trip was on day 2 and was undoubtedly the most exciting / nerve-racking experience of the entire trip! It was a large adult Fer-de-Lance (Bothrops asper), one of (if not the) most feared snake species in the whole of the Americas. This is a snake which has killed many people in Costa Rica and is as well known for its speed and aggression as it is for its deadly venom. It was discovered by staff at Maquenque Eco-Lodge during our night walk and when the call of ‘SNAKE!’ went up we went running towards it rather than away from it! We were treated to this incredible sight: 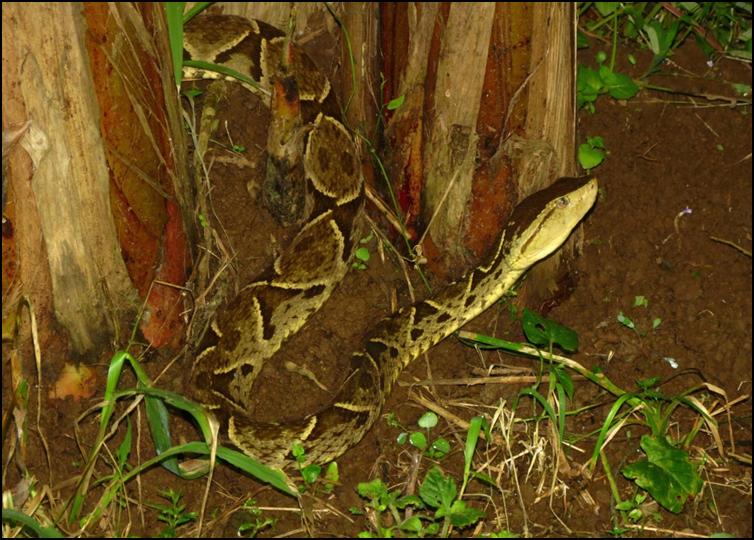 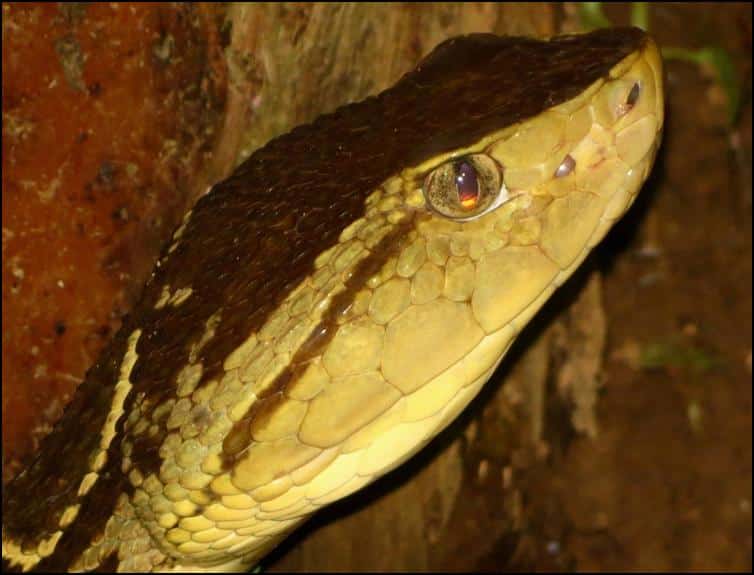 Despite the potential danger this snake could have posed to us I found it absolutely beautiful and was actually rather mesmerised by this amazing creature. It was fantastic to get just a couple of photographs of it before it disappeared at amazing speed into the undergrowth!

The second snake was found on the day we left Maquenque Lodge and could not have been more different to the Fer-de-lance, demonstrating perfectly the remarkable variety of snake species in Costa Rica! It was this lovely little white-headed snake (Enulius sclateri), undoubtedly the smallest and cutest snake we found during the entire trip, which is a forest floor dweller feeding on the eggs of other small reptile species. 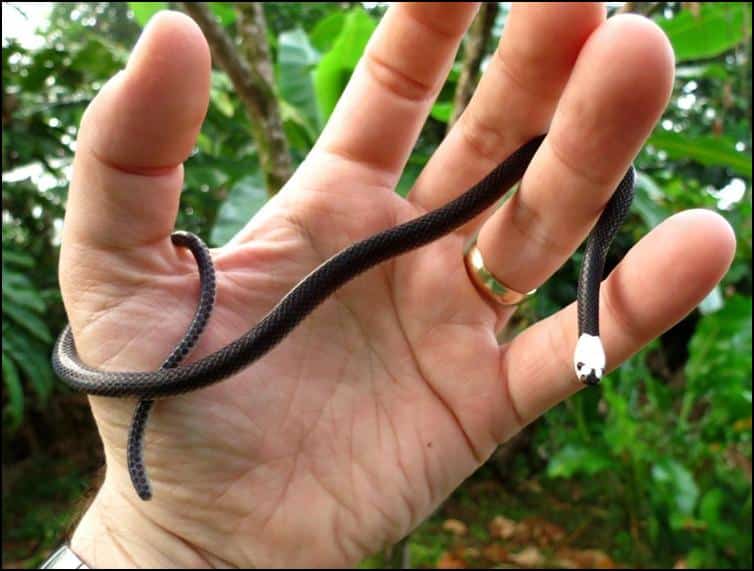 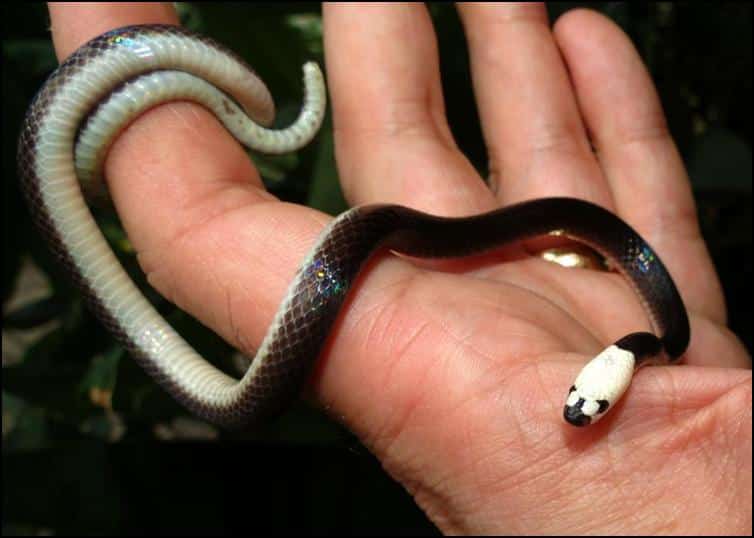 Much like the beautiful Mrs Noah, my Brazilian rainbow boa, this adorable little snake had scales which shone with all the colours of the rainbow as you can see on many parts of the body in the image below (apologies for the poor quality picture): 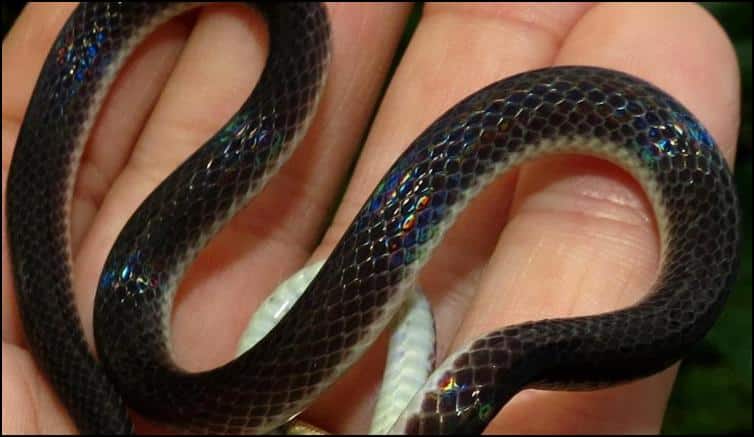 This occurs in both species because there are tiny ridges on their scales which act like prisms, refracting the light and creating this amazing rainbow-coloured effect which I personally find beautiful! It was just a very cute snake all round and absolutely tiny as you can see here! 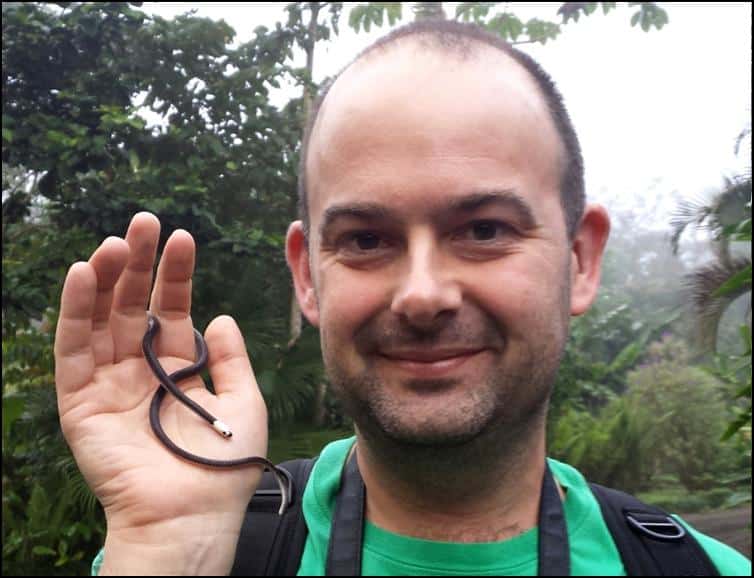 The next significant snake find, this time spotted by lovely fellow traveller Kiera during a daytime walk whilst we were exploring the rainforests adjacent to Selva Verde Lodge (the second place we stayed at on our travels), was an Allen’s coral snake (Micrurus alleni). 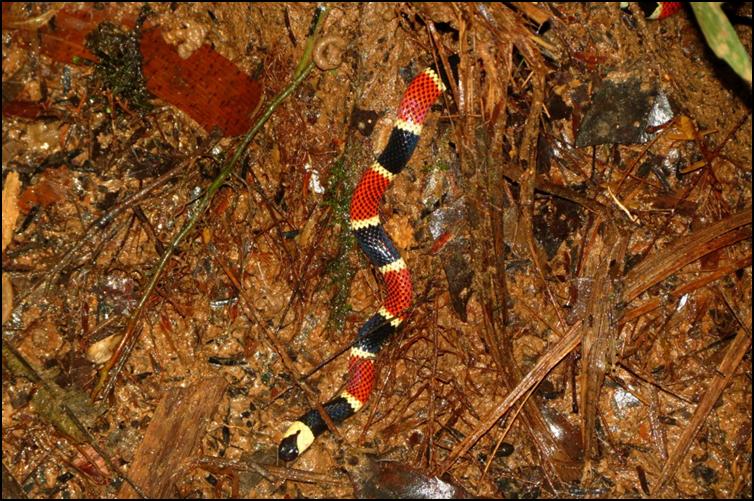 As well as being a very beautiful snake in its own right the significance of this one is that I keep a variety of milk and king snakes which have these same three colours but in a different order! When you are in Central America the differing order of the colours tells you whether or not the snake is venomous. Mine all have their bands in the repeating order red – black – yellow – black, indicating that they are harmless, whereas this coral snake has its bands in the order of red – yellow – black – yellow indicating that it is venomous! 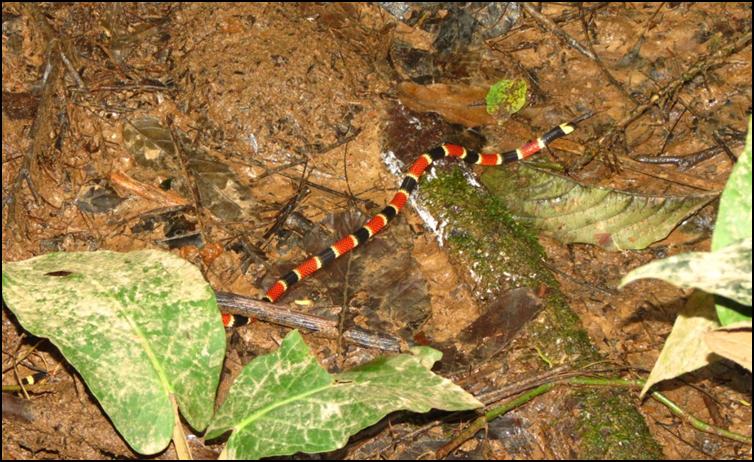 Milk and king snakes of the species I have here are said to mimic the colouration of the various species of coral snake to prevent predation, the colours serving as a warning to other animals not to attempt to eat the snake due to its venom – venom which in the case of my snakes they simply do not have!! Very cunning. This particular coral snake was found on the forest floor in this stream bed, slithering along in full view during the daytime. Unlike snakes which rely on their camouflage and staying hidden away for protection, coral snakes do not need to do so as their colouration acts as a clear warning to potential predators not to try to attack them! 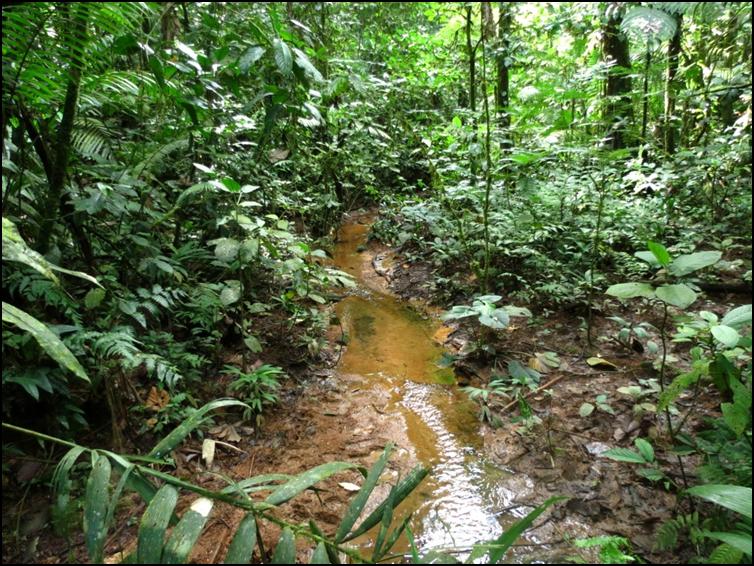 Another snake species found at Selva Verde Lodge, this time during a night walk that myself and Nick took rather than during the daytime, was the rather beautiful cloudy snail-eater (Sibon nebulata). This is a nocturnal species (hence its activity at night) with huge eyes and which feeds mainly on snails and slugs, both plentiful at night in the Costa Rican rainforests! 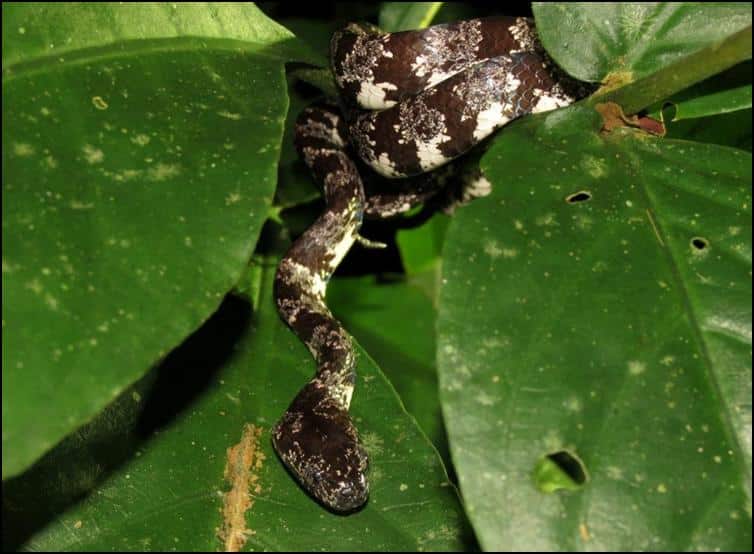 I actually found two individuals of this species in the space of less than 100m on a trail and thinking back on finding these two makes me smile because Nick somehow walked straight past both of them without noticing that they were there!! They were both resting in low level foliage in the trees adjacent to the trail and both were found with the use of a head torch in the darkness. 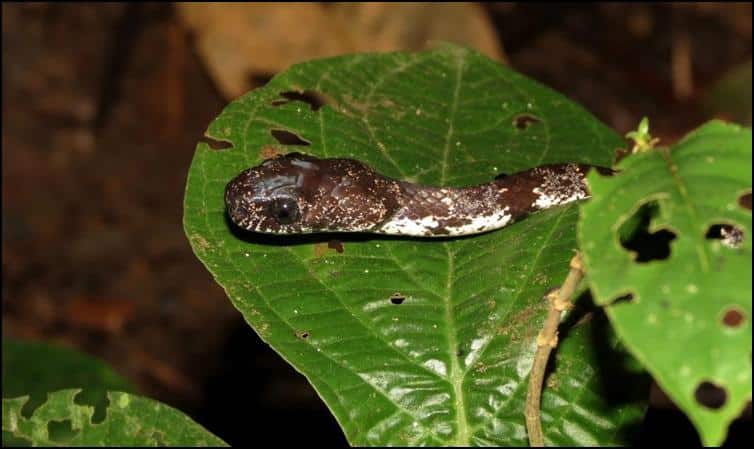 Here is Nick trying to wrangle the first one we found to prevent it from disappearing but sadly it was to no avail, once they knew we were there they disappeared pretty quickly! Beautiful snakes though with fabulous markings and a very distinctively shaped broad head, with large powerful jaws for crushing snail shells. 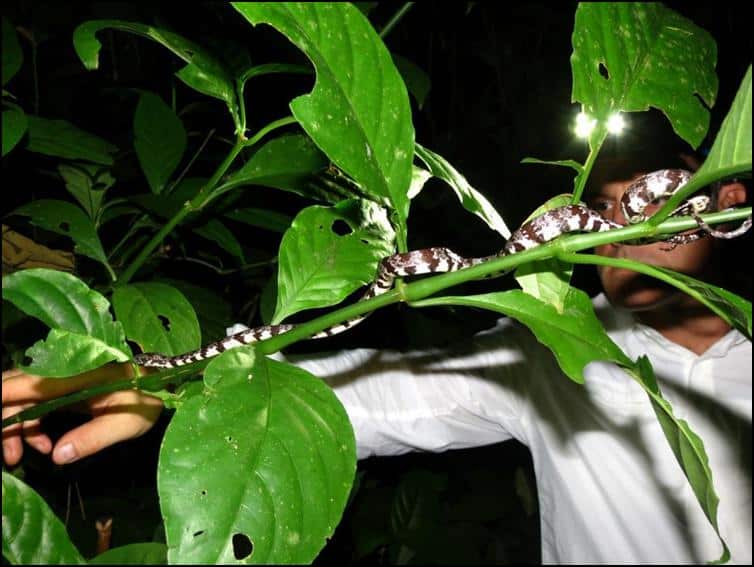 The final snake found at Selva Verde Lodge was also found by myself and also at night-time, this time though it was just hanging around the pond by the restaurant and I happened upon it completely by chance whilst arriving at the restaurant! It was a Northern cat-eyed snake, sadly I only managed to get one decent picture of it before it slithered very quickly away! 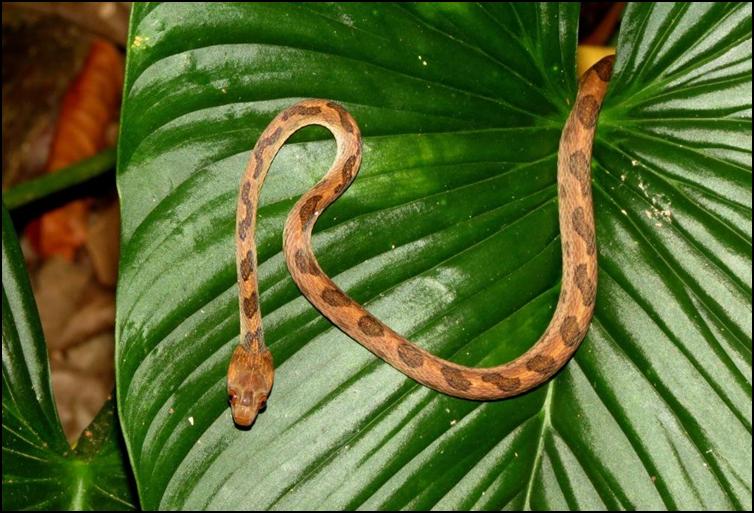 Despite our best efforts to find other snakes we actually had to wait until the final day of the trip to discover another. Some of us were walking along a trail during the daytime at Luna Lodge on the Osa Peninsula when I noticed something moving on the path ahead. As I approached it became obvious that it was a snake but it quickly disappeared down a slope and was very hard to photograph! These are the best two shots I could get of this one: 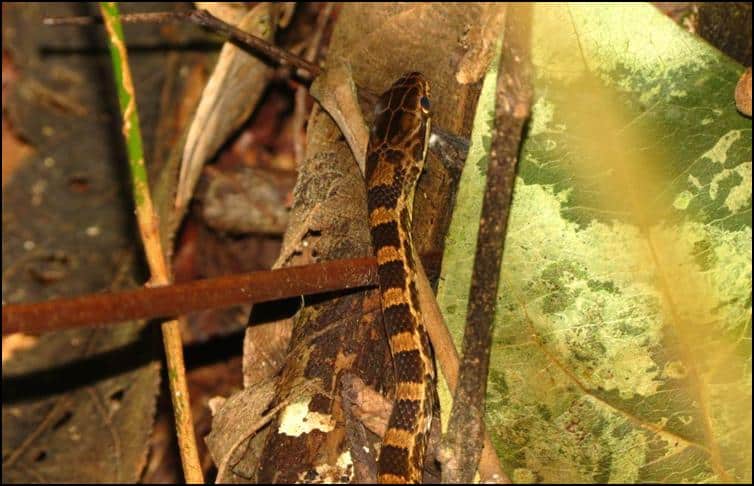 The very confusing thing was that whilst in the field neither myself or Nick could work out which species this snake was, as it did not match the pictures or descriptions of any snake in the very detailed reptile guide books we had available! Thankfully Nick’s expertise came through later on and it turned out that it was in fact a juvenile of a snake called the salmon-bellied racer (Mastigodryas melanolomus), a species in which the juveniles look totally different from the adult snakes! 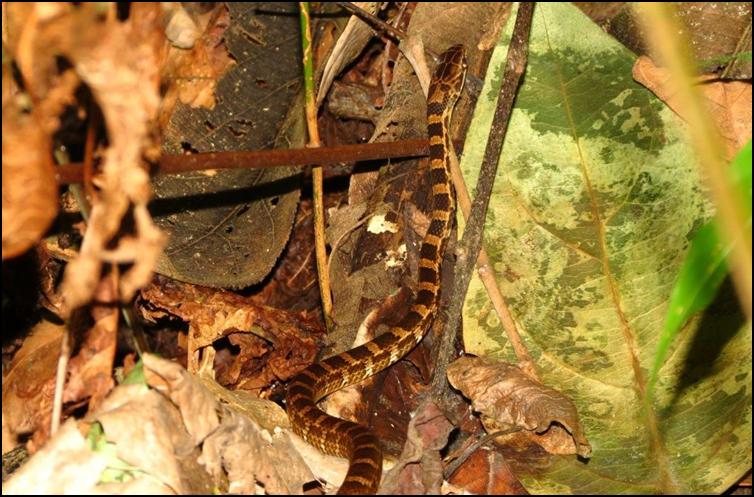 Whilst we saw a fabulous variety of snakes during the trip we did not see the no. 1 species on my Costa Rica wish list which was the eyelash pit viper (Bothriechis schlegelii). This is one of the world’s most beautiful snakes and I was SO hopeful that we might find one! I guess I will just have to travel back to Costa Rica one day to try again…

For pictures of the crocodilians we met in Costa Rica please click HERE!