Another group of insects by which I was absolutely wowed in Costa Rica were the ants. I’ve never thought of myself as a big fan of ants but some of the species we encountered on the trip were so amazing (and for a variety of reasons) that it was impossible not to be impressed by them! First up has to be the formidable bullet ant (Paraponera clavata), the world’s largest ant species and also the species which has the honour of being the most painful stinging insect on earth. It is such a shame that these pictures don’t convey the size of these ants because they are just HUGE, around 3cm or more than an inch long. 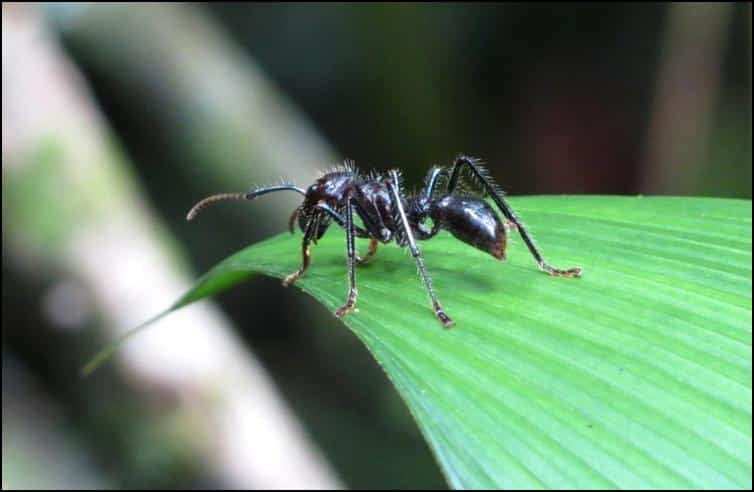 I was aware that we might encounter them during the trip and whilst I was excited at the prospect they were also the main reason I wore long trousers every day in the rainforest! Their sting is medically regarded to be the most painful of any living insect (and possibly any living creature) and akin to the pain of a gunshot, hence their common name. In parts of their range boys must undergo an agonising initiation ceremony whereby for a full ten minutes they wear gloves into which hundreds of bullet ants are interwoven, stingers facing inward. The boys might have to undergo this ordeal as many as twenty times over a period of months or years! TV presenter Steve Backshall famously underwent this ritual whilst filming a series called ‘Venom Hunter’ for the Discovery Channel and it reduced him to a quivering wreck. If somebody as strong as Steve could be reduced to tears by such small creatures I wasn’t about to take any chances! Nick Baker himself has also experienced being stung by a bullet ant and he described the worst pain imaginable and how it put him in bed for 24hrs, another common description of the aftermath of this amazing insect’s sting.

One day whilst I was taking photographs of one of the basilisk lizards I encountered at Selva Verde Lodge, a large ant walked across my leg. It caught my eye because it seemed to be made of solid gold and it was shimmering in the sunshine! This is the best photograph I managed to get of it and it is such a shame because it does not do this amazing creature any justice whatsoever, it was ABSOLUTELY beautiful. 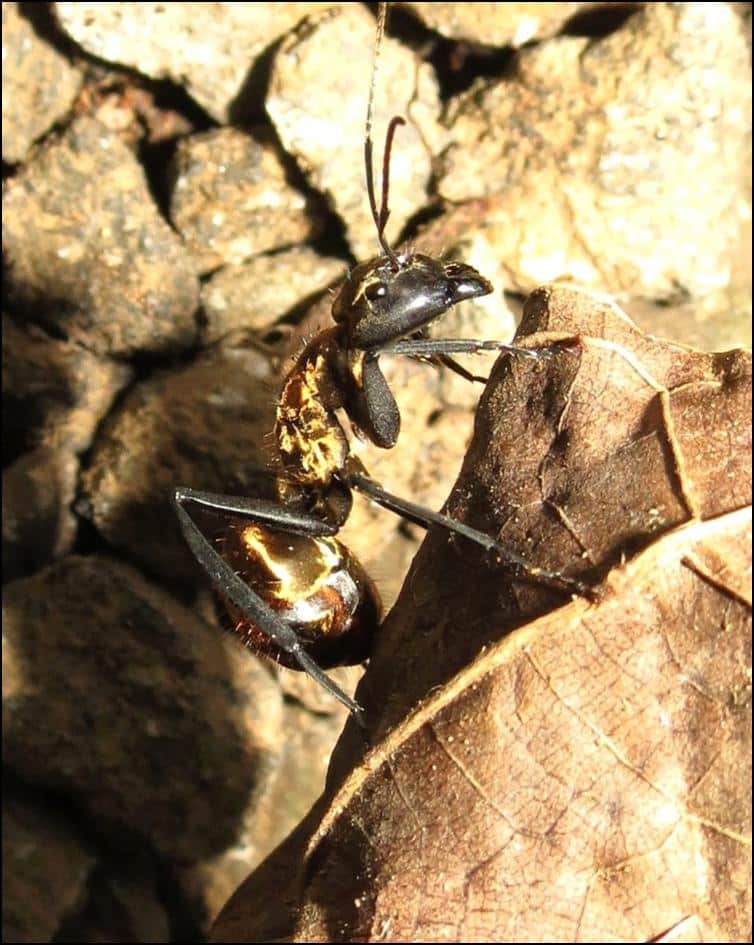 It turned out to be a carpenter ant of the genus Camponotus, of which there are 1000+ species worldwide. I wish I could have taken some better photographs of it but the truth is that it just would not stop moving and trying to photograph a 1.5cm long moving target is rather tricky!

Not so tricky to photograph were an AMAZING number of army ants (Eciton burchellii) which myself & Nick and a couple of fellow travellers literally stumbled upon one night at Luna Lodge on the Osa Peninsula. We watched them for some time and it was truly amazing to see thousands upon thousands of ants making their away across the forest floor. It was mesmerising and awe-inspiring in equal measure!

Amongst the ants were many soldiers, these do the job of protecting the colony and have the most enormous mandibles as you can see below! You can also see that a couple of the workers in the picture below are carrying creamy-coloured ant larvae. Amazing to watch!

As well as the ants and the beetles and the katydids we also encountered a great many praying mantises on our travels. I absolutely adore mantises and love the camouflage many species (including the ones I have here myself) demonstrate. Here are a few examples of the amazing mantis species we found (camouflaged and otherwise)!

As expected we also encountered some truly amazing butterflies and moths (and caterpillars)! Many of these were very tricky to photograph due to their lack of willingness to sit still for more than a split second but here are a few of my favourites! This first one was pointed out to me by one of the owners of Maquenque Lodge and at first I wondered why he would be pointing out a dead leaf on the floor. He then explained that it was a moth and the moment it stuck itself to my clothing I realised he wasn’t kidding! 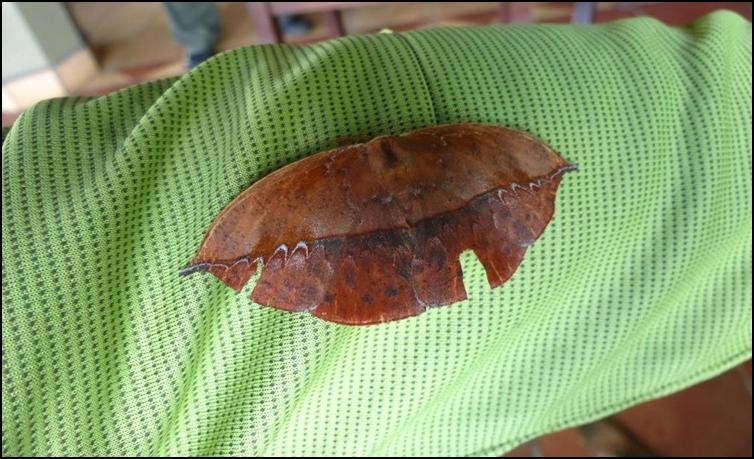 This is one of the best examples of dead leaf camouflage I have ever seen, the shape and lack of visible limbs make this moth absolutely perfect for hiding amongst dead leaves! It was only when I got the picture below that some people believed that this was in fact a live moth and not a dead leaf! Amazing. 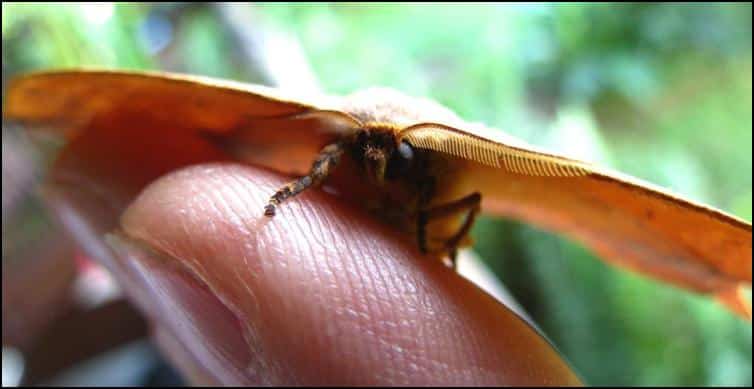 The following pictures are of just a few more of my favourite moths and butterflies we encountered during the trip, all absolutely beautiful! 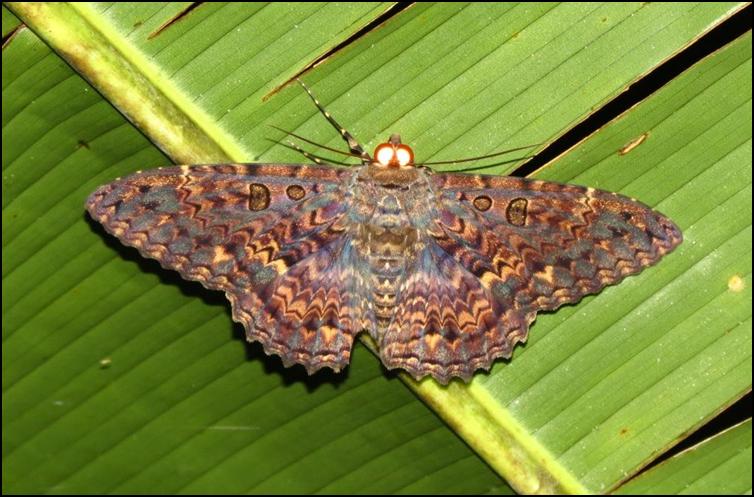 This caterpillar was one of many we saw and it was absolutely amazing, its colours were stunning and it had some of the longest hairs I have ever seen on any living thing!