In December 2013 I went on the trip of a lifetime to Costa Rica in Central America, on a small group tour guided by the fantastic TV presenter & naturalist Nick Baker. These pages have been created specifically to share my experiences of the truly amazing wildlife of this beautiful country. If you scroll down this page it will introduce the trip and a few of my personal wildlife highlights or, if you are particularly interested in more information about a specific group of animals, please feel free to click the links below to find pages full of pictures of my favourite species & individuals of that particular animal group which were encountered during the trip!

I had wanted to visit the rainforests of Central or South America for many many years and it was absolutely fantastic to finally have the opportunity to do so. I’ve spent years talking to children in schools and other settings about rainforest life because so many of the animal species in my collection are found in rainforests around the world. As I had previously only spent a total of half a day in a rainforest, whilst in Tobago during a holiday for a family wedding in 2000, I had wanted to experience these amazing habitats so that I would be able to share my own personal experiences with children as well as those I have obtained over the years from books, films & TV!

What made this particular two-week small group tour all the more special (and the very reason I chose this specific trip over similar tours) was that it was guided by TV presenter and fellow lifelong naturalist Nick Baker, pictured below firstly with me and secondly with one of the amazing giant metallic Ceiba borer beetles (Euchroma gigantea) which I found during the first leg of our trip! 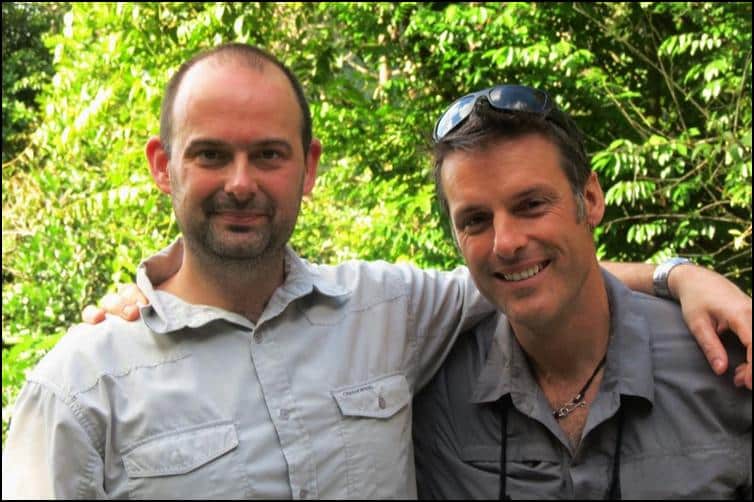 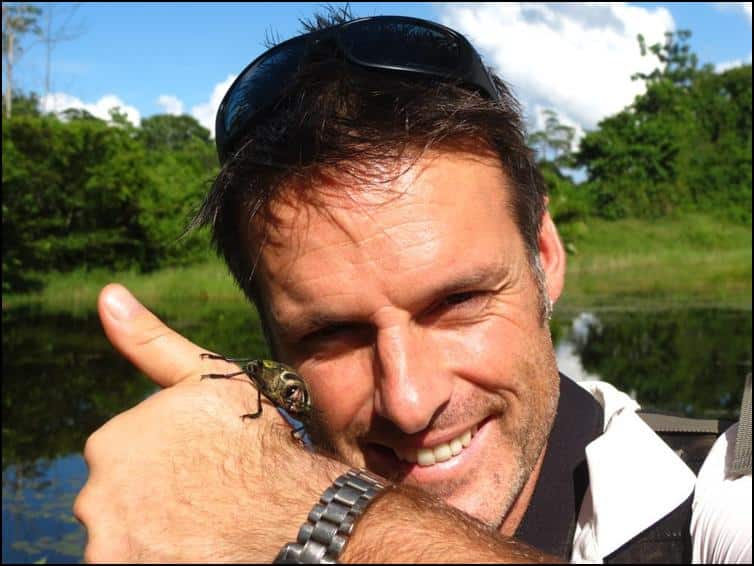 It was an absolute privilege to explore the amazing rainforests with Nick, as well as his lovely wife Ceri and a fabulous group of like-minded wildlife-loving people. We all got on really well and became known as Baker’s Dozen during the trip! Here we all are at a riverside cafe where we stopped during a cruise between Maquenque Eco-Lodge and Selva Verde Lodge, respectively the first and second places at which we stayed:

It was an absolute privilege to explore the amazing rainforests with Nick, as well as his lovely wife Ceri and a fabulous group of like-minded wildlife-loving people. We all got on really well and became known as Baker’s Dozen during the trip! Here we all are at a riverside cafe where we stopped during a cruise between Maquenque Eco-Lodge and Selva Verde Lodge, respectively the first and second places at which we stayed: 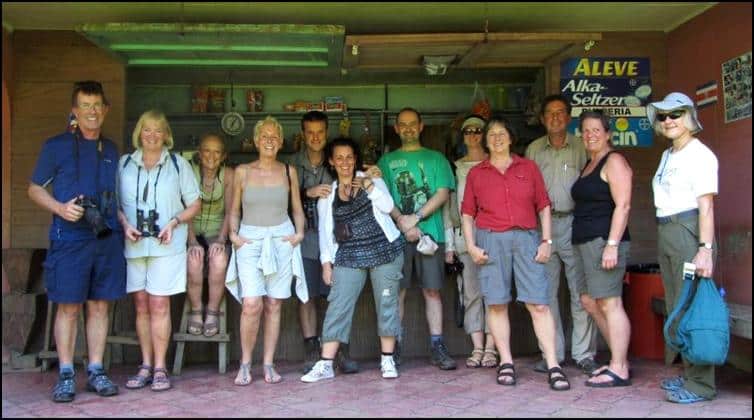 We stayed at a total of four very different locations within Costa Rica during the fortnight and experienced a huge variety of rainforest habitats, as well as many other diverse wildlife habitats including wetlands and coastal areas. Here we are on a trek near Savegre Lodge where we stayed during our adventures in the beautiful high altitude cloud forest of San Gerardo de Dota (sadly lacking Ceri in this particular shot): 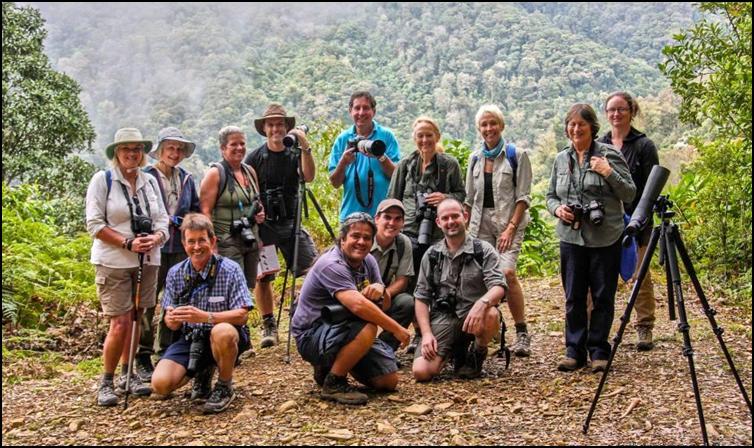 The gentleman front & just left of centre in the picture above is Frank Simms, our brilliant local guide who stayed with us throughout the entire trip. Here we all are again along with some of the staff at the wonderful Luna Lodge on the Osa Peninsula, the final destination of the trip. My sincere thanks to Frank Simms for permission to use both of his group photos on my website! 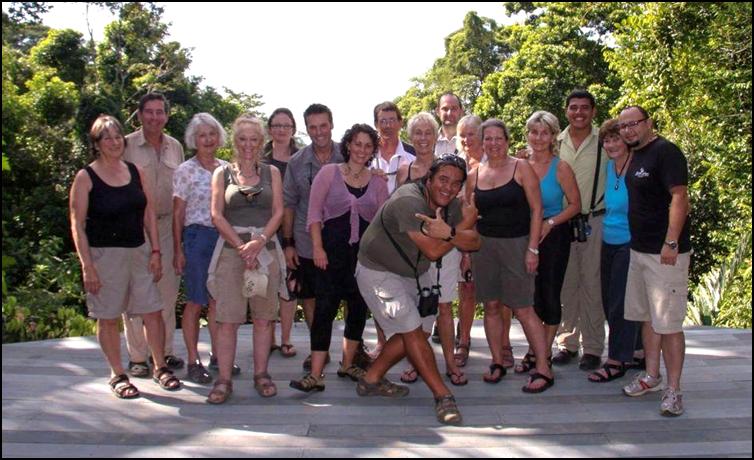 We encountered FAR too many amazing animals to even think about showing them all here but I wanted to share just a few of the highlights of my trip because it truly was a remarkable experience and one which gave me much greater insight than ever before into the incredible diversity, beauty & challenges of rainforest life; something which I am excited to now be able to share with children I meet wherever I go! 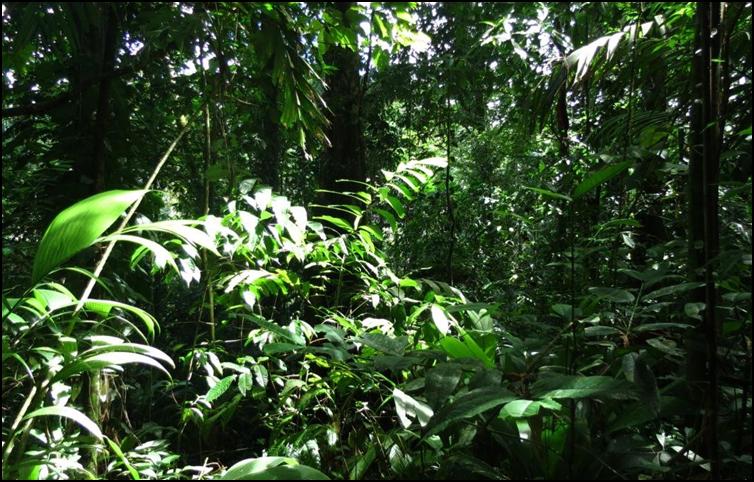 Whilst we saw some wonderful mammals and awe-inspiring birds during the trip it was the reptiles, amphibians and invertebrates that I was personally most looking forward to seeing in the wild due to my lifelong fascination and love for these animals. The trip certainly didn’t disappoint and every day (& night) we encountered lots of these animals, so for me personally it was a bit like being a child in a very big sweet shop! 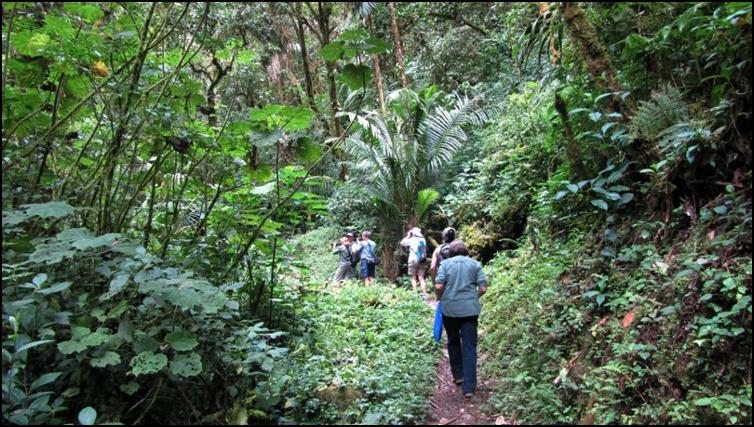 Whilst our organised rainforest walks were all daytime excursions (like the one above), at least myself & Nick and sometimes a couple of fellow travellers were also out almost every night exploring the nocturnal rainforest world. For me these were some of the main highlights of the trip because the diversity of reptiles, amphibians, insects, spiders & other invertebrates active at night was quite simply astonishing.

The picture above is of one of the superb rainforest trails at Maquenque Eco-Lodge, the first place at which we stayed during the trip, and one which we explored both during the daytime and at night (twice)! The picture was taken with my camera’s flash and without the flash you would not have seen anything at all in this picture, as the rainforest is absolutely pitch black at night. This is something which many people I’ve shared my experiences with have said they would find quite terrifying, but personally I found it incredibly exciting as you literally never knew what animals you would find – or indeed where they would appear from! We wore head torches to light our path and to spot the wildlife: 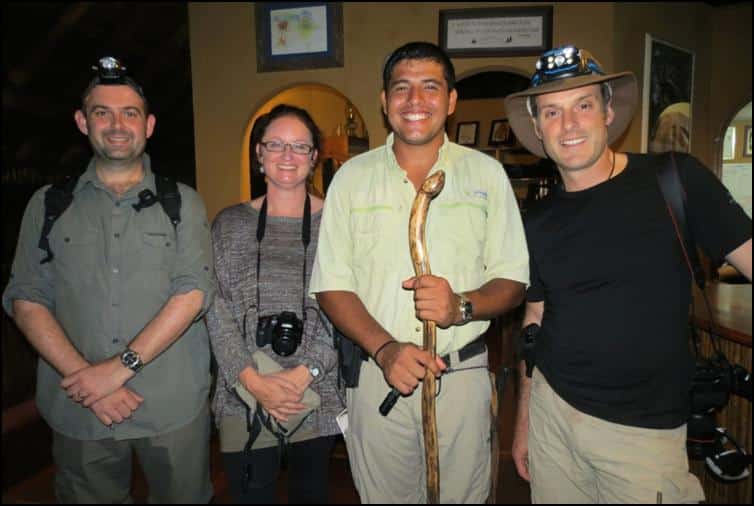 This picture above is of myself & Nick with lovely fellow traveller Kiera and also Gary, one of the fantastic staff members & guides at Luna Lodge, heading out for our final ever night walk of the entire trip. Whilst it was incredibly sad to be out for the final time we saw some amazing species of animals which we had not seen previously and I was treated to a particularly unusual experience when this leaf frog decided to jump onto my head! 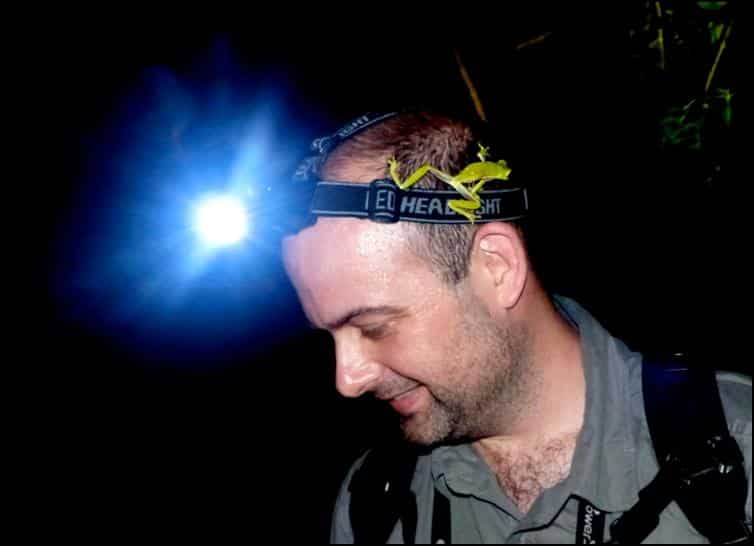 The frogs (and other amphibians) were one group of animals of which we encountered a huge number of species and they are one of many types of animal for which Costa Rica’s remarkable biodiversity is especially well known. The leaf frogs, like the one above, were mainly a vivid green colour whereas other species were varying shades of brown and unbelievably well camouflaged on the rainforest floor, whilst others like the poison dart frogs showed off with garish colours to warn predators of their poisonous nature, just like these two individuals below! 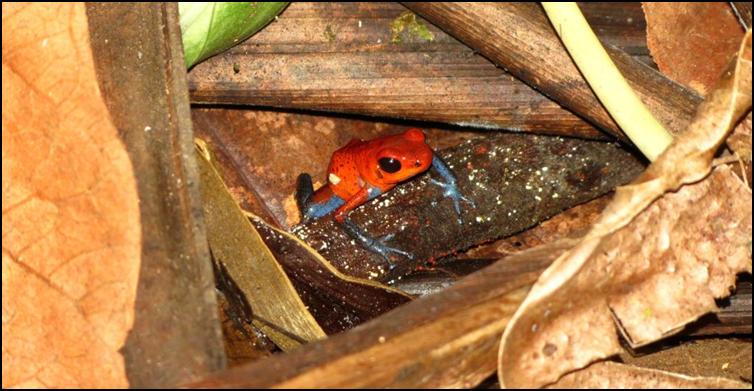 Poison dart frogs are animals which I have worked with as a volunteer at Bristol Zoo in the past but to see them in the wild was an enormous privilege. The species above is Oophaga pumilio (formerly known as Dendrobates pumilio) and is commonly know as the strawberry poison dart frog due to its bright red colouration. It occurs in an amazing variety of colour and pattern forms and in this colour form it is also often referred to as the blue jeans dart frog due to its four blue legs, giving it the appearance of a bright red frog wearing blue denim trousers!

The species directly above is Dendrobates auratus, simply known as the green & black poison dart frog, a species with such striking contrast of bright green against deep black colouration. We saw many individuals of both species during the trip and the variation in pattern was remarkable.

I spend lots of my time teaching children in schools & other settings about how animals protect themselves from danger so it was fantastic to see dart frogs in the flesh, a perfect living demonstration of animals using colour as a warning. We did encounter another great example of an animal using its colouration as a deterrent to predators, which was this beautiful coral snake: 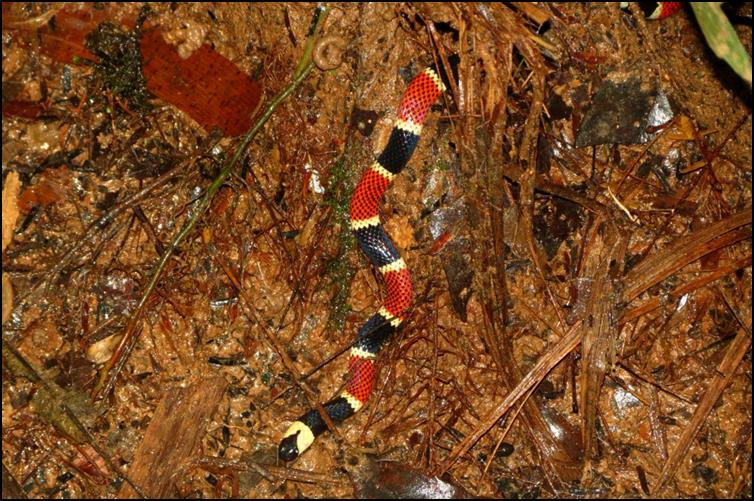 Just like the dart frogs this is another species which doesn’t feel the need to conceal itself or hide away in the forest as its colouration is a very clear warning of its venomous nature!

I personally own a couple of tricolour banded snakes with the same three colours but in a different pattern order, namely Half Pint my Sinaloan milk snake and Raya my variable king snake. These snake species are considered to be coral snake mimics and to use their colouration as a predation deterrent despite not being venomous or dangerous themselves at all!

For many more examples of species we encountered that demonstrate the different ways in which animals protect themselves, click HERE!